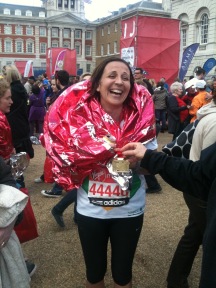 Proof of my great feat!

So my blogs are getting less frequent and I hope this builds a frisson of excitement/curiosity about the next one, rather than just thoughts of ‘lazy cow, what’s she up to?’ Various reasons stop me writing, I would like to say a thrilling life of parties and glamour but reality is it’s  usually just sorting out stinking p.e kits, taking sickly hamsters to the vet, and cooking meals for a family of five where usually no one agrees on what they want for bloody dinner.

Anyway my last blog was incredibly short and as you have probably  realised from reading my previous blogs, I struggle to express my feelings at the time. I find it easier to explain in hindsight. Not to my family and friends but to everyone else. It’s all just too exhausting when I am feeling pretty shattered anyway. So here is a rather quick explanation of my feelings, post ‘MRI all clear’….pissed off! That’s it. I was furious and tired. How? Why? Well I can only explain it by comparing it to a running race, a long one. ( you see that’s the marathon runner coming out in me! I ran one, once, years ago but I will live off that achievement for years!)  You do all the training for say, a 10k, and it’s hard, the weather’s shit, you’re tired but you finally get there, everyone’s cheering you on, you can see the finish line, hear the happiness from the crowd, but as you step towards the finish line, it disappears and moves another 10k, the crowd is leaving, shouting ‘well done’, and I’m left saying “but the race isnt over? Yes I know I should be happy, but I really wanted to stop now. I wanted to hang my trainers up and come home with you all, cheering and happy and celebrating. I’ve got to keep going. I’m tired and I don’t want to f**king keep going! Can you hear that? I don’t want to race any more!” That was how I felt. The apprehension and sleepless nights that accompany me round scan time are never going to go away. Every six months it will be back and I felt mightily pissed off about it. I know I’m lucky to have the scans, I know I’m lucky it was caught early, I know I’m lucky it hasn’t spread. It’s just sometimes I don’t feel so lucky.

So anyway I have moved on and allowed those feelings to blend back into the background. I am back to normal, happy (well usually a bit moany) Ruth. Again over this time some people have amazed me with their ability to understand where I am coming from or what I am thinking without me saying anything. I met a friend who I haven’t known for very long, and don’t see very often, but she said “I read your blog and thought yes that’s shit you must feel so annoyed at the lack of control.” I hadn’t said anything to her, she had just read ‘I’m off to drink champagne’ but she could see through it, she thought about how she would feel and it made me think, there are really so many kind, thoughtful people out there. People that have the ability to really think about a situation and know what you are feeling when I sometimes don’t know how to express it myself. It’s the lack of control that pisses me off. I want the race to stop, I want to take my trainers off, but I can’t. The lack of control makes me furious! But to put that fury to good use I have entered a half marathon, if this cancer is going to make me keep going I will run and raise money as I go. My just giving page will be up and running soon (pardon the pun!) and f**k the never-ending 10k’s (MRI’S), I will have my other finish line to get to which I will cross and finish and which I can go home from and celebrate with everyone else.

The other eye news is I have a grey patch appear on my eye. see below.

See nothing is ever plain sailing? Anyway I’m not really worried about this, just a little bit. I e-mailed the photos to my consultant hoping for a “Yes, to be expected see you in January.” But instead got a “This is a common occurrence after brachytherapy but would like to see you at my emergency clinic to confirm.” Confirm what? That is is the common occurrence or what? What else could it be? Anyway this is where google becomes your friend. When I googled back at the beginning, when I was first diagnosed, I was terrified, as everything pointed to eye cancer. Now when I google grey eye, no cancer related stories appear – hooray. I’ve been happily googling away, reading about discolouration, strange pigmentation, a man with high cholesterol, but no horror stories. I’m off to see my consultant later in the week, so if in the mean time anyone finds a story that grey eye means your head is about to drop off, please pm me so I can at least be prepared.

And ending on an even lighter note I just thought I would share my children’s helpful thoughts on grey eye matter. My eldest daughter wondered if it would spread? “Will it spread all over the white of your eye? you’ll look sort of demonic!” Thanks!

Middle child helpfully told me that I could get my eyeball tattooed. “People do you know? It’s fine?” As if she bloody knew, and she’s the one that faints at the sight of blood.

Youngest, most troubled child just asked “will you be ok?”

“Good! because there’s a really good film coming out called ‘A monster calls’ (yes you guessed it the monster is the cancer!) and I want you to take me to see it!”

F**king great! I will keep you posted on grey eye and let you know how the hideous film is that I will be forced to watch with my gorgeous, thoughtful girls! Better pop a bottle in the fridge just to see me through. Cheers!